Artworks from the collection

The Front Greenough Flats presents the viewer with a unique landscape.

The long, narrow, alluvial flood plain is bounded on the NE and SW by low limestone hills and sand dunes. Scattered throughout are the crumbling ruins of colonial limestone buildings and gum trees twisted into bizarre shapes by the SW winds of summer.

Yet this powerful landscape has infrequently been portrayed by artists. For instance, the Art Gallery of Western Australia only has two paintings of Greenough in its collection.

As part of this museum’s Collection Policy, we seek to collect artistic representations of the Front Greenough Flats.

The oldest item in the collection is Tom Rand’s sketch of the Golden Sheaf Hotel in the flood of 1888 (his other version of this sketch is in the National Gallery of Australia collection). Most of the other works date from the 1970s through to the 1990s. 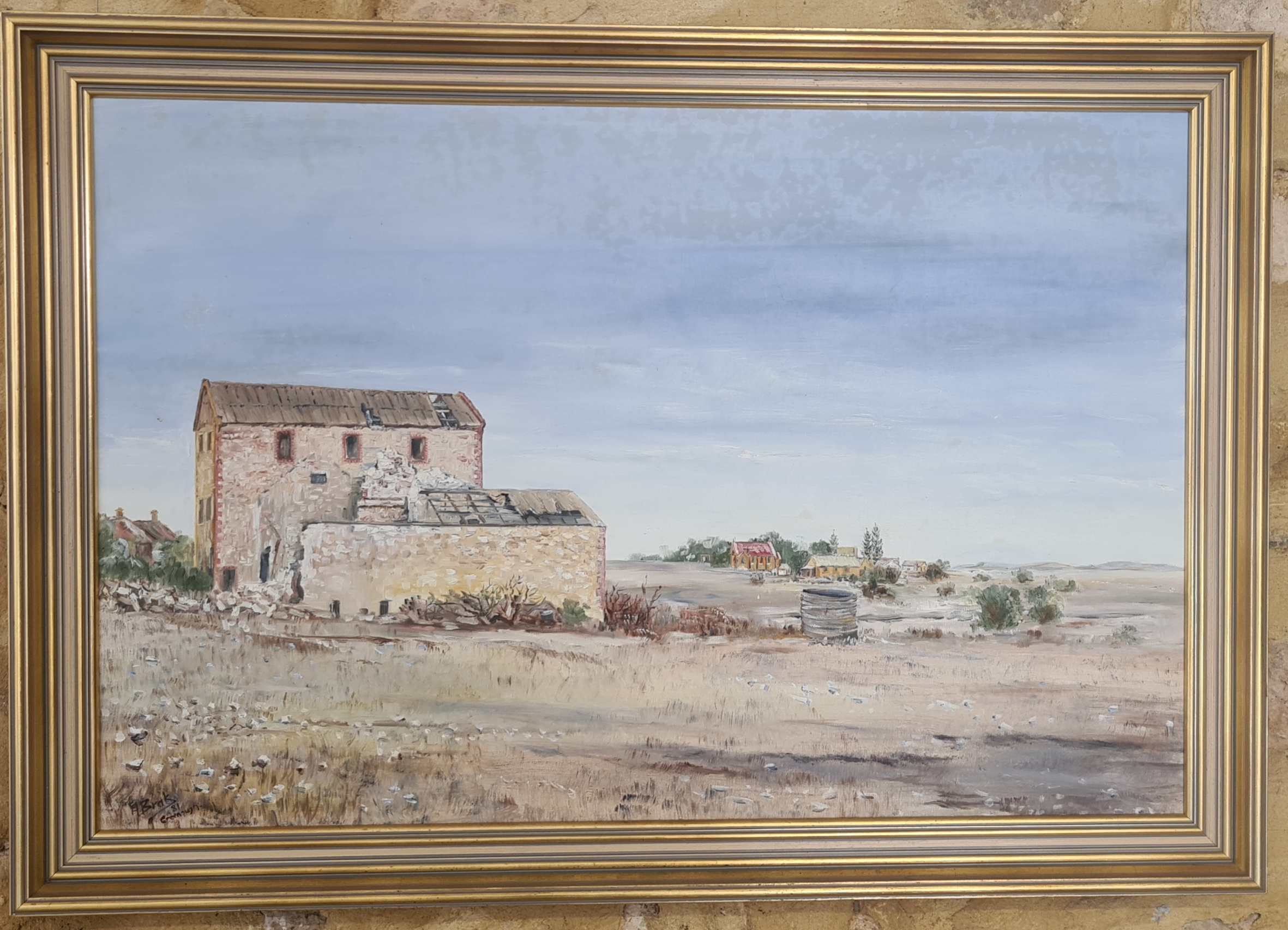 This 1981 painting of the Greenough Flats by H. Brak was purchased by the Shire of Greenough and was displayed in their offices until the Shire amalgamated with the City of Geraldton in 2007.

Jim Evans completed this painting of a section of the Greenough River to the south of the Convict Bridge on 14th December 1993.

The painting was purchased by Joy Clinch who donated it in 2012. 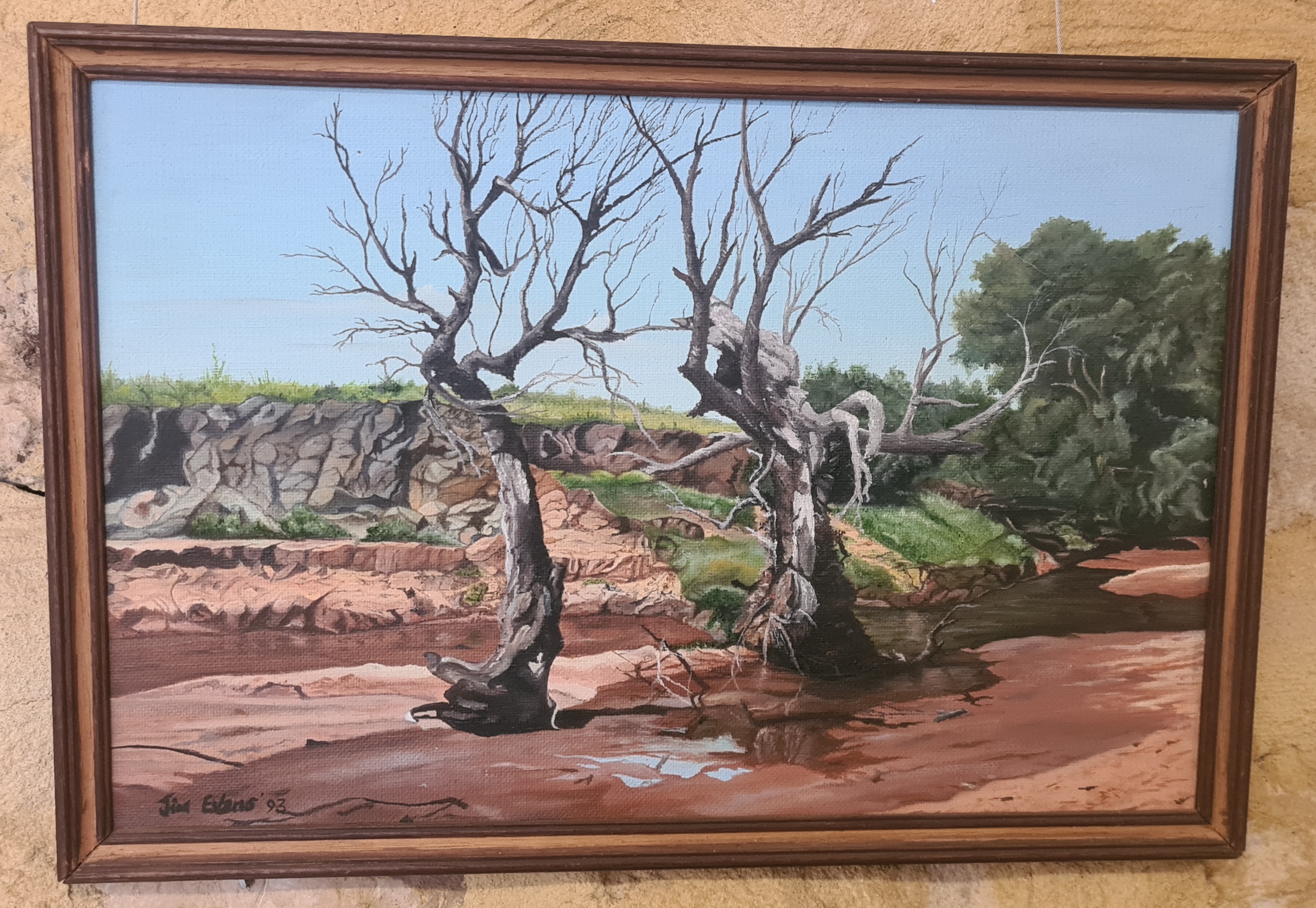 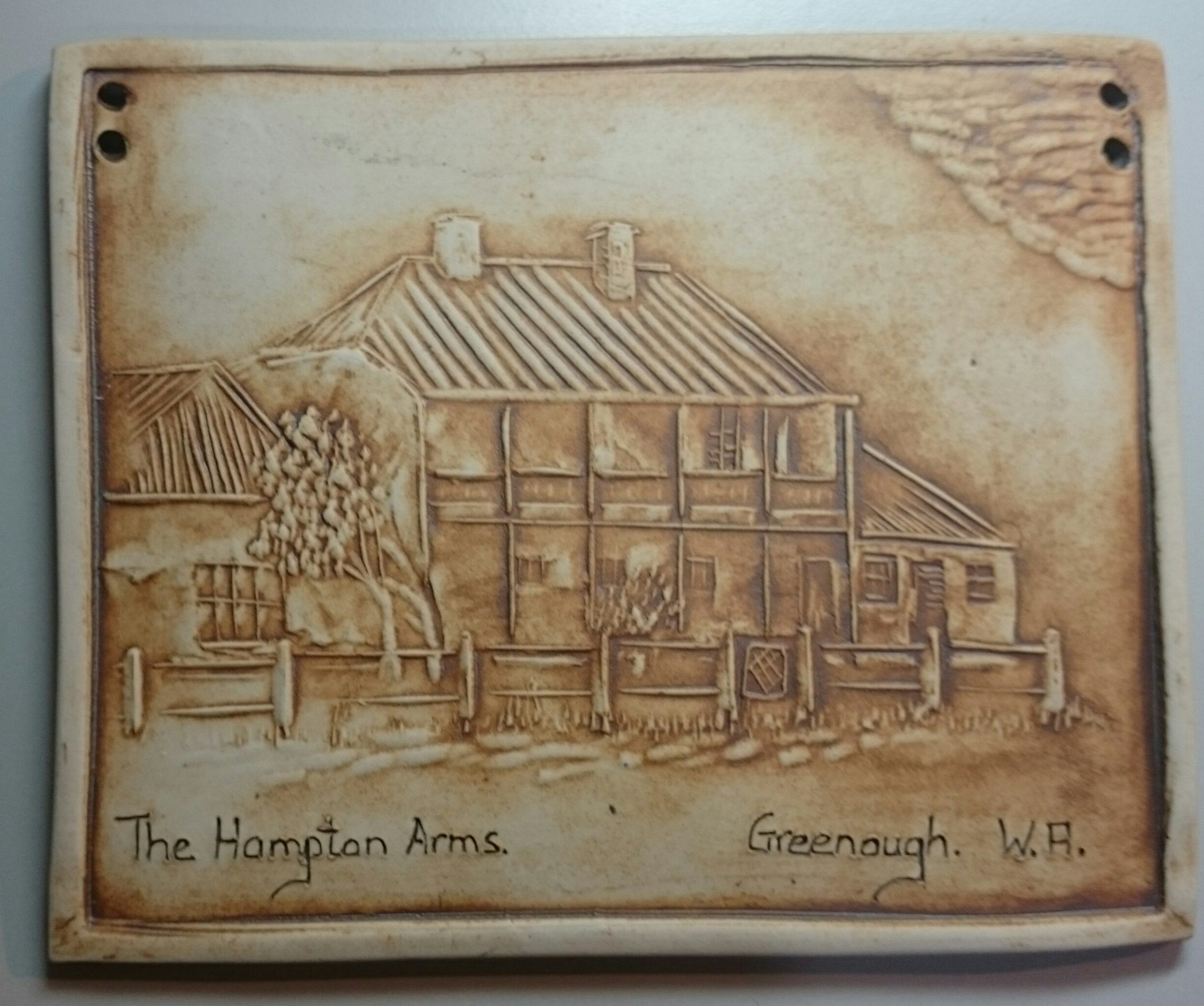 This tile was made by Ian Dowling at the Greenough River Pottery c1981 to celebrate the Hampton Arms Inn being granted the first Historic Inn Licence in Western Australia.

The Hampton Hotel (as it was then known) was opened by Francis Watson Pearson in 1863 and was the first licensed premises at Greenough.

The hotel closed in 1896, and for many years remained a farmhouse until being purchased and restored by Alistair & Robyn McKechnie in 1978.

This painting of Goodwin’s Cottage by B. Koda was donated by Jenny Nota in 2015.

Constructed for Edward (Ned) Goodwin as a dwelling in c1890, the Goodwin’s lived here until Mr Goodwin’s death in 1912. Subsequently the Presentation Sisters used the building as a school, changing the original four room interior to three rooms. The building was used for this purpose until about 1951. The place is now owned by the National Trust of Australia (WA). 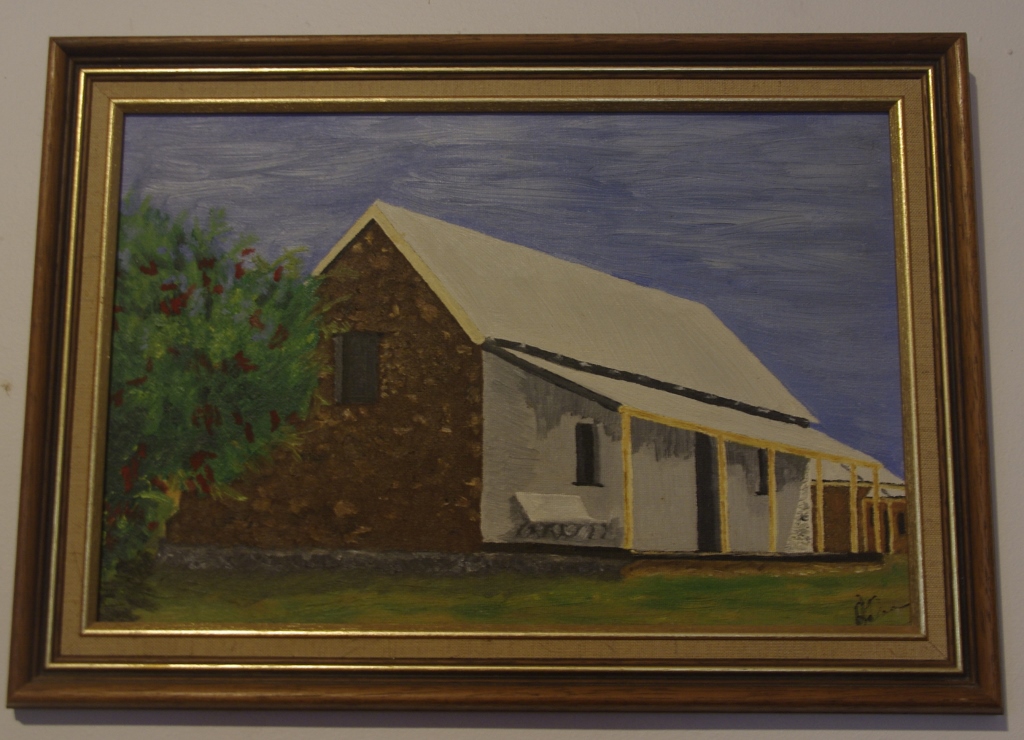 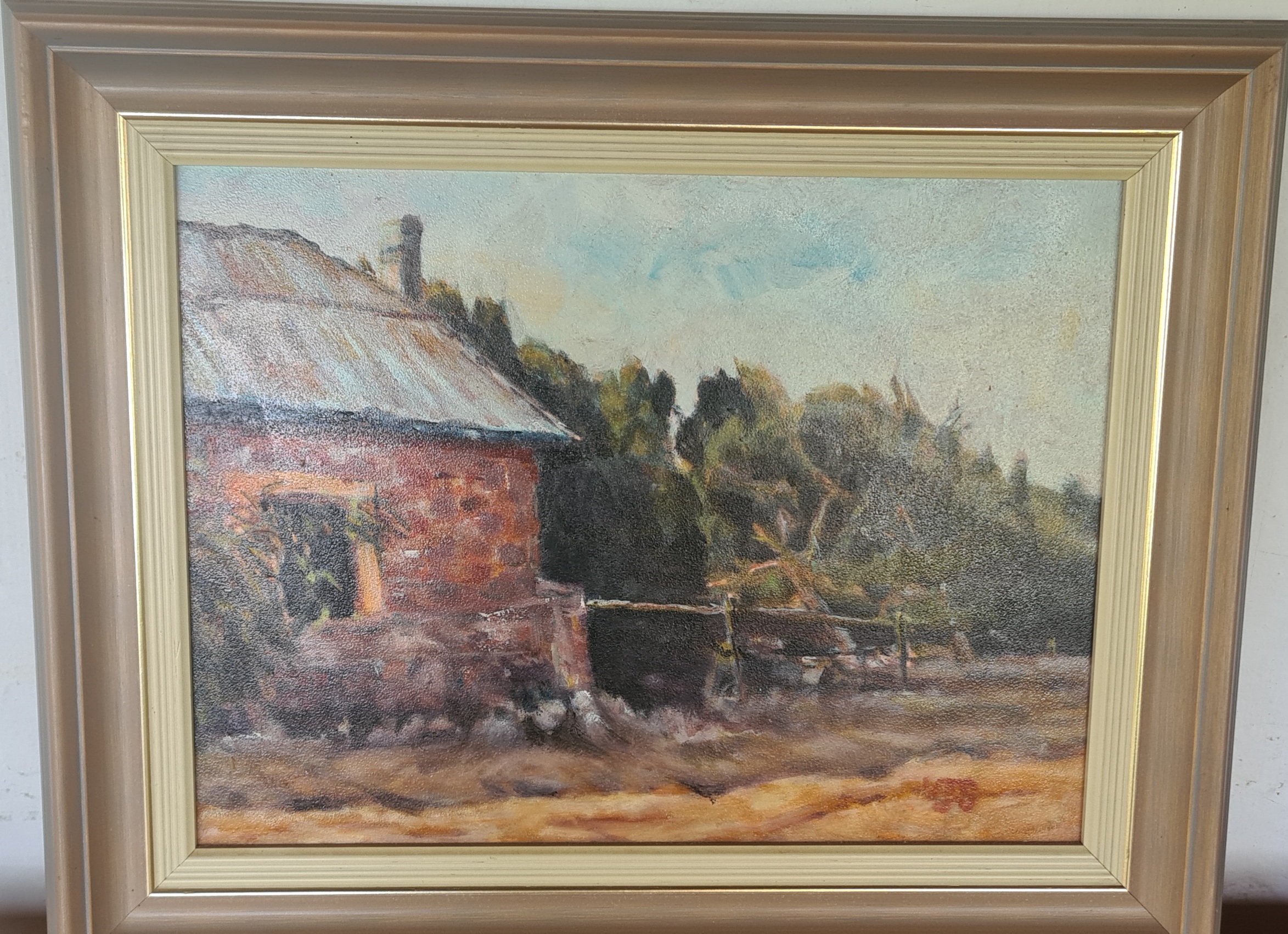 When Joyce Sievenpiper visited her daughter Beth in 1998 she took a photo of the old Raphoe homestead. On her return to Canada she made this painting. It was then hung at Bentwood Olive Grove, Greenough. Beth Sievenpiper donated the painting in 2021.

Raphoe was the family home of Thomas Duncan and his wife Isabella (nee Pearson).

Constructed of limestone and brick in several stages during the 1870s, the U-shaped building with a double-storey frontage was surrounded by extensive walled gardens.

The property was purchased by Peter Rudduck in 1970, and the house was left to fall into ruin.

Raphoe was damaged by fire in 1999 and remains on private property.

Titled “Storm – Greenough,” by Sandra Durack and painted in 1984, this is an image of McNeece’s cottage at Greenough.

The painting was donated by Maureen Millet in 2022.

A former private in the 8th Regiment, John McNeece came to this colony in 1862 with his wife Mary and sons, Thomas, William and John.

He was granted two small blocks of land and built a cottage right on what was to be the boundary fence between his two blocks.

John died in 1892, and the cottage was  occupied up to 1926 by his son William and wife, Margaret. The last occupant was their son Thomas who lived here until his death in 1981.

The cottage was then allowed to fall into ruin and little remains. 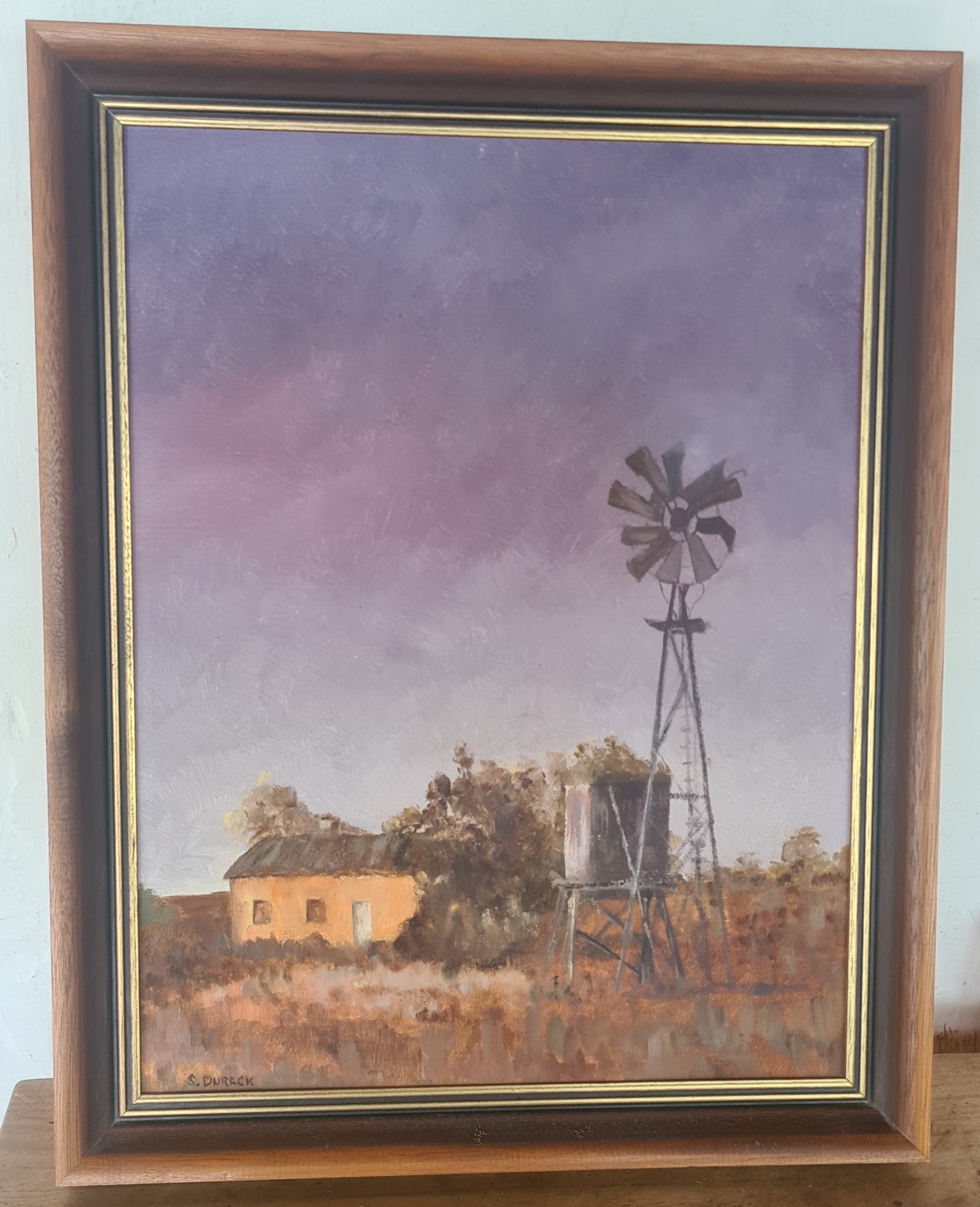